This is a short history of the prison, packed full of information on the development of the buildings, the different versions of the separate system employed in the prison over the years, the staff who worked there, and, of course, the prisoners and their day-to-day routine, work, diet, punishment, illness, escapes, executions and more.

Also on EBay, and in Gloucester at the Tourist Information Centre and Gloucestershire Family History Centre, Alvin Street.

This publication details seven cases of murder, attempted murder and manslaughter which took place in Gloucester city and its outskirts, between 1873 and 1934. Victims of the crimes were: Sailor Emanuel Evain, stabbed outside the Barley Mow Inn, in 1873; Lilly Cooke, a prostitute attacked by her landlord, in 1875; Walter Partridge, died in unexplained circumstances at the County Lunatic Asylum, in 1882; Sarah Ann Hewett, kicked and punched to death by her husband in 1886; Hubert Boulter, aged six, drowned in the Gloucester and Berkeley Canal, in 1903; Matthew Rodgers, killed by his wife at their house in New Street, in 1919; and George Wells, murdered by his son in 1934. 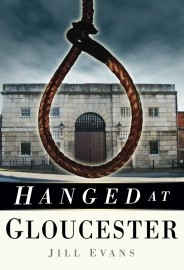 Relates the stories of 123 men and women from Gloucestershire – and beyond – who were hanged at Gloucester between 1792 and 1939. Two executions took place at the City Gaol; the rest were carried out at the County Prison, which opened in 1791. Includes an appendix listing all known hangings in Gloucester, at Over (just outside Gloucester), and elsewhere in the county, between 1731 and 1790.

This volume gives an event or fact from Gloucester’s history for every day of the year. Quite a bit of crime is included, ranging from hearings at petty sessions courts to the Assizes, but there are lots of other themes too, such as sport, entertainment, politics, religious life, births and deaths of eminent people, and royal visits.