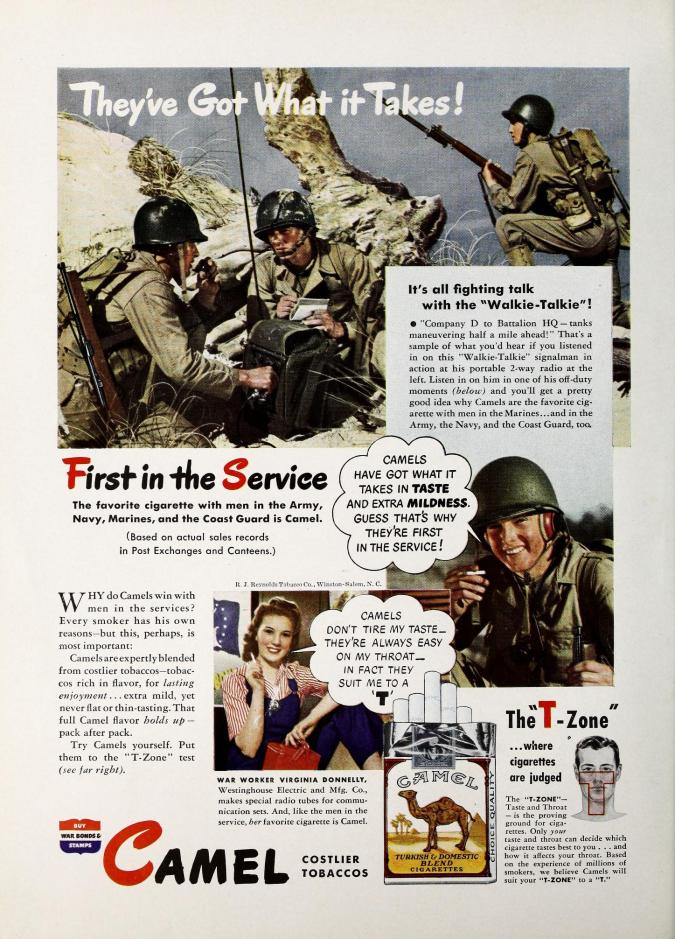 Advertisement for Camel cigarettes in Carolina Magazine, May 1943 (via archive.org.)

This was the eye-catching headline to a story which appeared in the Cheltenham Chronicle on 4 September 1943, concerning the appearance at Cheltenham Police Court of two women who were accused of receiving cigarettes stolen by a U.S. Army Private. This was not a case of petty pilfering, as six wooden cases containing a total of 60,000 Camel cigarettes had been stolen from an American camp. Mabel Lilian Seldon and Doris Carpenter, both of Number 16 Crabtree Place, Cheltenham, were charged with receiving 10,000 of the cigarettes from Private Richard R. Hamilton, on or about the 20 August 1943. Both women pleaded not guilty.

Superintendent A.W. Hopkins of Gloucestershire Police explained that some American soldiers, including Hamilton, were in the custody of the U.S. Military Police, charged with stealing six cases of Camel cigarettes from the U.S. Army Authorities. Each case contained 10,000 cigarettes, divided into cartons of 200, which in turn were divided into packets of 20.

The six cases had been stolen from the camp on the night of 20 August. The matter had been reported to the police and Detective Sergeant Smith, along with Lieutenant Butler and Sergeant Ward of the U.S. Army, started an investigation. Their inquiries led them to a house rented by Mrs Doris Carpenter, who had her friend Mabel Seldon staying with her. The house was searched and quantities of cigarettes were found in various places. Someone then noticed that a baby’s pram, which had been in the hall when the searchers first arrived at the house, was now missing, along with Seldon’s three-week-old infant. Lieutenant Butler and Detective Sergeant Smith ran out to look around and discovered the pram some distance from the house, being pushed by an elder child. Taking the baby out, they found 44 cartons of cigarettes packed in the bottom of the pram and covered in clothing. The two women were arrested and charged with receiving stolen goods.

In their written statements, it transpired that Private ‘Dick’ Hamilton had made frequent visits to the house in Crabtree Place, as he had been ‘keeping company’ with Mabel Seldon for about twelve months. He had visited on the night of 20 August and shortly after midnight he had borrowed Doris Carpenter’s bicycle, saying he had to fetch some cases of cigarettes which he had hidden in a hedge near the racecourse. He returned later with a wooden case full of cigarettes, which he left in a passage by the stairs. The next day, he asked to borrow the bicycle again, saying he thought he could get rid of another three cases.

Later Hamilton had a drink with Seldon at the Cambridge Inn in North Street. He told her that he had got rid of another case. They took a taxi back to Crabtree Place, where Hamilton told the driver to wait for some cases. He later went off in the taxi with the cases, returning 15 minutes later to ask if he could borrow the bicycle again. He went off on that and they didn’t see him again. On the next morning, the taxi driver from the previous night came to the house and took away more cigarettes. Later, when they became worried that Dick had not returned, they decided to hide the remaining cigarettes in the pram.

In court, Doris Carpenter gave evidence and changed her plea to guilty. Speaking on her behalf, her counsel, Mr A. Mason Amery, suggested that her loyalty to her friend had overcome her duty as a citizen. She had no initial part in the offences and was just in the house when Hamilton visited Seldon. From the moment she had known that the property was stolen, she had acted like a fool. She was bound over for two years.

Addressing Mabel Seldon, the Mayor, who presided, told her that the magistrates believed hers was a very bad case: ‘You have associated with this man Hamilton, and you have committed these offences, rendering yourself liable to six months imprisonment. You have been guilty of telling bare-faced lies and altogether we feel you case is one which should be dealt with severely.’ Despite his strong words, Seldon was not sentenced to serve six months in prison, but three.

At the same court session, a married couple were also charged with receiving some of the stolen cigarettes. Thomas and Mabel Knight, of Number 267 High Street, Cheltenham, were accused of receiving three cases, each containing 10,000 Camel cigarettes, property of the USA Army Authorities, knowing them to be stolen. Both pleaded not guilty. They were represented by the same counsel as the two women, Mr A. Mason Amery.

Superintendent Hopkins stated that inquiries had led him, accompanied by Detective Sergeant Smith and Detective Constable Sheppard, to premises in High Street, where Mr Knight ran a business as a butcher. Mr Knight said that there were no cigarettes on his premises, but Detective Sergeant Smith spoke to Mrs Knight in another room, and she said that an American soldier had brought them, and they were under the bed.

In a written statement, Mrs Knight had said that at about 11 pm on Saturday 21 August, an American soldier came to the door with a taxi and said he was ‘Dick’, a friend of her son Harold. He asked if he could leave three parcels there until Wednesday. She agreed, but on seeing the size of the cases voiced her concern that they would take up a lot of room. The soldier told her to take the wooden cases off and she did so, placing the cardboard cartons under the bed. The soldier told her she could have two packets of cigarettes to give to her daughter’s young man.

Mr Amery put up a powerful plea for the defence, saying the only issue was whether the couple knew the cigarettes were stolen. The American had called at the house and told Mrs Knight that he was a friend of her son’s. He asked her to keep some packets for her for a while. Mrs Knight did not see anything sinister in this, as people often left parcels at the house.

Thomas Knight in his defence said that he didn’t see the American soldier on the night he came to the door and knew nothing about the cigarettes until Sunday morning when he took his wife a cup of tea and and saw the packages. She told him an American soldier named Dick had left them and would call for them later. Knight denied several points set out in a written statement made by Hamilton, in which it was declared that Knight had agreed to take the cigarettes at five shillings a carton.

After a short absence to consider, the magistrates dismissed the case, as the Bench did not think the evidence was sufficiently strong to justify conviction. Superintendent Hopkins then drew attention to a charge of receiving cigarettes which had been proposed to be brought against Cecil Alexander Hall, the licensee of the Cambridge Inn, North Street. Due to the verdict on the last case, he asked for the case to be dropped, which was agreed. Mr J.D. Lane, on behalf of Mr Hall, said he hoped there would be no stigma attached to his client, as he would have pleaded not guilty and the case would have been ‘most strenuously contested’.

The proceedings in the Cheltenham Police Court that day with regards to the stolen cigarettes resulted in one defendant imprisoned, one bound over, two having their cases dismissed and one against whom the case was dropped. What happened to Richard ‘Dick’ Hamilton and his fellows, then in the charge of the U.S. Military Police, was not reported.

Newspapers (accessed at www.britishnewspaperarchive.co.uk, 25 and 26 Aug 2010)

Local historian and writer. Author of 'Hanged at Gloucester', 'The Gloucester Book of Days', 'Gloucester Murder & Crime' and 'A History of Gloucester Prison'

Please note that all posts on this site are my copyright, as are photographs taken by me. None may be reproduced, in whole or in part, without my permission (except for re-blogs). If you use information from any of my posts in published articles, an acknowledgement would be appreciated!

tales from the Police courts of the metropolis

Musings from the Archive...

Between Severn and Wye

nonfictioness.wordpress.com/
The Hotels in Gloucester Blog

A Great and Historic English City, with the stunning Cotswolds Wildlife Park on your door step.

A blogger's thoughts from home

Discovering, Debating, and Interpreting the Past

Crime, Madness and the Asylum

looking for beauty in the small things

Crime in the Community

A blog for the Old Bailey Online and London Lives

Historical bits and pieces about crime and punishment in Gloucestershire