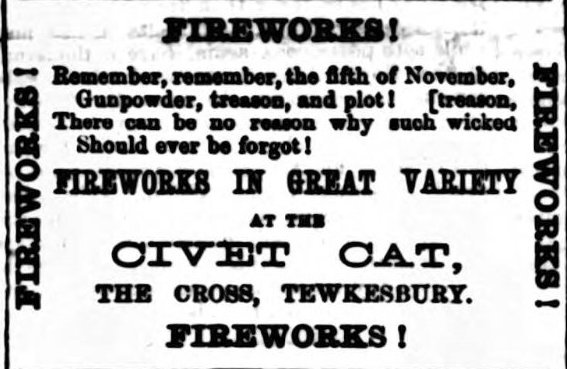 Advertisement in the Tewkesbury Register, 28 Oct 1876, for fireworks on sale at a business in Tewkesbury, which may not have been too popular with its neighbours. (British Newspaper Archive. Image copyright The British Library Board. All Rights Reserved.)

In the 1870s, many of the residents of Tewkesbury did not look forward to November the fifth. Bonfire Night was a rowdy occasion in many parts of Britain, marked by the customary burning of effigies of Guy Fawkes on bonfires and the lighting of fireworks, but in Tewkesbury it was widely believed that the annual celebrations had got out of hand and that the Borough Police were failing to control the young men and boys who took over the streets as soon as darkness fell.

In 1876, November the fifth fell on a Sunday, and because it was a religious day, many places did not celebrate in the usual way. In Tewkesbury, the people who lived or worked in the buildings along the main streets were hoping for a quiet Bonfire Night for once and indeed, the evening itself was quiet. Unfortunately though, the anniversary of the Gunpowder Plot was marked by the town’s revellers on the fourth and sixth of November instead, and the celebrations in Tewkesbury in 1876 proved to be the worst yet.

The Tewkesbury Register and the Gloucester Journal reported on the events which had taken place, stating that on the evenings of Saturday the fourth and Monday the sixth of November, the main thoroughfares were ‘all ablaze’. Youths were striding around, firing off  pistols and miniature cannons (described as ‘nipple-cannons’), and small boys were running about, swinging fireballs over their heads and hurling them and against doors, windows and shutters. Another group were kicking a large burning tar barrel around in the street, with no regard to where it went. At the Cross, a large group gathered which pelted anyone who ventured to pass by with squibs, crackers and ‘other flaming missiles’. Eventually, a building used to store vehicles took fire and was almost destroyed.

The Gloucester Journal, which described the observance of Bonfire Night at Tewkesbury as an ‘annual nuisance’, said that the police had taken a number of firearms off the youths, but otherwise did nothing to ‘subdue this very objectionable manner of remembering the 5th of November, although the public are loud in their denunciation of the nuisance’. The Tewkesbury Register commented that in previous years, the authorities had ‘stood by and winked at these proceedings’, but this year, things had gone too far.

It appeared that the local authorities agreed with the press, as on November the fifth in 1877, there were lots of police on the streets in Tewkesbury, ready to deal with any disturbances. There were very few incidents, except for the odd cannon explosion and the occasional firework being let off. In addition to the police presence, an organised bonfire and firework display was put on for the public, held in a space well away from the main streets, which was greatly enjoyed by all who attended and went on long into the night.

All newspapers accessed on www.britishnewspaperarchive.co.uk

Local historian and writer. Author of 'Hanged at Gloucester', 'The Gloucester Book of Days', 'Gloucester Murder & Crime' and 'A History of Gloucester Prison'

Please note that all posts on this site are my copyright, as are photographs taken by me. None may be reproduced, in whole or in part, without my permission (except for re-blogs). If you use information from any of my posts in published articles, an acknowledgement would be appreciated!

tales from the Police courts of the metropolis

Musings from the Archive...

Between Severn and Wye

nonfictioness.wordpress.com/
The Hotels in Gloucester Blog

A Great and Historic English City, with the stunning Cotswolds Wildlife Park on your door step.

A blogger's thoughts from home

Discovering, Debating, and Interpreting the Past

Crime, Madness and the Asylum

looking for beauty in the small things

Crime in the Community

A blog for the Old Bailey Online and London Lives

Historical bits and pieces about crime and punishment in Gloucestershire